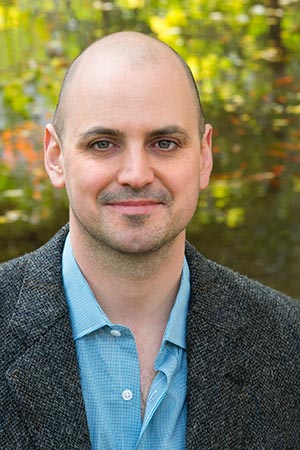 Midwestern Gothic staffer Hannah Gordon talked with author Matthew Thomas about his acclaimed novel We Are Not Ourselves, the American Dream, authors that inspire him, and more.

Hannah Gordon: What’s your connection to the Midwest?

Matthew Thomas: I went to college in Chicago and did a fair amount of traveling in the area to see friends during vacations, so in addition to Illinois, I got to know Wisconsin, Minnesota, Iowa, and Indiana, and I came to really love the region.

HG: Your novel, We Are Not Ourselves, explores the complexity of the “American Dream” through the Leary family. What made you want to write about the American Dream?

MT: I suppose I chose to write about the “American dream” because it’s an elastic concept that has proved an interesting backdrop against which dreams of all sorts have been cast over the course of the last century. There’s an undying optimism to the dream that is beautiful but also dark, insofar as people pursuing the dream may be exploited by the unscrupulous or powerful. Exploring the American dream is a way to explore the story of America more generally, through time.

I think there’s still some power in the “dream” as long as representative democracy exists. It’s a winnowing power, but it’s there.

For a small, very lucky sliver of the population—the technocratic elites—there is real, immediate opportunity for class mobility. Brainpower will always find a home on Wall Street and in Silicon Valley.

But outside the highly circumscribed context of those gifted with exceptional ability who also happen to be close enough to the mechanisms of advancement—who earn scholarships to the right colleges, know the right people and have access to the good jobs—it’s a different story. There’s never been a bigger gulf between the very rich and the very poor. Fifty years ago, the CEO-to-worker compensation ratio was about 20:1. Now it’s about 300:1. Even in the recent past, ordinary people could sock some money away, maybe own their home and still have some savings left over, but wages have stagnated over time. The gap between the wealthy and everyone else is growing. The game seems more rigged. Average Americans feel depressed about their prospects.

The energy that immigrants bring, the self-determination they possess, the spirit of renewal they offer, is a powerful ally not just for the immigrants themselves, but for the country they enter. In many ways the future health of the middle class seems to depend on America’s willingness not only to admit immigrants, but also to extend to them the same opportunities for citizenship their counterparts enjoyed in the past. Immigration is more than a shot in the arm; it’s an infusion of lifeblood. And the story of immigration is the story of the American Dream. And when immigration is stifled, or immigrants are made to suffer inhumane treatment, or are discriminated against, then that dream is corrupted.

HG: The story also grapples with the idea of success (within the scope of the American Dream)–the perfect family, careers, money–and it challenges that idea. How would you define success?

MT: I suppose I would define success as that happiness or sense of fulfillment that one achieves when one’s intentions and actions are in harmony, and when those intentions are suffused with love, or a sense of justice, or most broadly an understanding of the value of beings other than oneself. I think a successful life is predicated on healthy relationships, self-awareness, the opportunity for fulfilling work, service to others, and a feeling for the sublime. 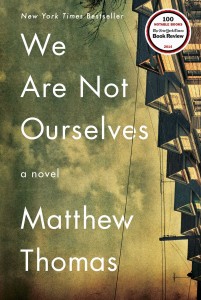 HG: What do you hope readers take away from We Are Not Ourselves?

MT: I think my goal as a writer has always been to make even one person feel less alone in the universe while reading my book. I have always wanted to write a book that someone might turn to when he or she feels that there is no reason to go on. It’s not always easy to find literary novels that are life-giving in that way. The hard part is to do it without making a book sentimental. It’s a high-wire act at times. George Saunders is especially good at it.

I hope readers will find solace in reading about another person going through what Eileen goes through and coming out the other side. I hope my book inspires people to feel hope in the face of despair and to believe it’s possible to preserve dignity amidst experiences that profoundly reduce one’s power and dignity. I hope it reminds people that we’re always capable of learning something, even the most intransigent among us and even late in life; that, while we might never really change, we can evolve into more loving versions of the selves we already are. I hope it might make some readers who live lives outside the margins of what the media considers “important” feel recognized. And I hope it inspires people to value the time they have, and their relationships, and maybe give the people who matter to them a hug.

HG: We Are Not Ourselves is your first published novel. What was that process like?

MT: I started in the spring of 2003, and I sold the novel ten years later, in the spring of 2013. I was a high school teacher for most of the years I was writing the book. When I was done, I found an agent and he sold it shortly thereafter. Things came together quickly at the end, but most of the journey was a long, solo trip in a little boat, with no sight of land.

HG: What other authors inspire you?

MT: This is a hard question to answer without turning it into a laundry list. One writer I admire who doesn’t have a wide enough following outside writers is Evan S. Connell. I named one of my characters after him because I have such high regard for him as a writer and for Mrs. Bridge as a book. He’s an extraordinary crafter of sentences, and he works the language like a musical instrument. But the remarkable thing about his prose is that no matter how artful the language is, it’s always in the service of furthering the story and advancing characterization. Richard Yates and John Williams come to mind alongside Connell as writers I admire whose sentences overwhelm you with their eloquence but never in a gratuitous way.

It’s easier for me to talk about what writers I assigned in the creative writing class I taught to high school seniors in recent years. We read a lot of short stories, which is the nature of the beast when you’re teaching workshops. I gave them excerpts from Diaz’s Drown, Wallace’s Brief Interviews with Hideous Men, Proulx’s Wyoming Stories. I gave them Dubliners in its entirety, as well as all of CivilWarLand in Bad Decline and Pastoralia. We went over a good number of the selections in the Pevear and Volokhonsky translation of Chekhov’s stories, as well as in Hemingway’s first 49 stories and Where I’m Calling From. I made them read “The Cask of Amontillado,” “Young Goodman Brown,” and “Bartleby the Scrivener.” We read selections from Grace Paley’s Enormous Changes at the Last Minute, Andre Dubus’s Dancing After Hours, and Ethan Canin’s Emperor of the Air. We read “Ranch Girl,” by Maile Meloy, Nabokov’s “Signs and Symbols,” Barry Hannah’s “Testimony of Pilot,” Coover’s “The Babysitter,” Bausch’s “All the Way in Flagstaff, Arizona,” and Tobias Wolff’s “In the Garden of the North American Martyrs.”

HG: What’s next for you?

MT: I’m writing another novel, about a contemporary family and the individuals in it, and the larger context of the time and place they live in, and some of the things happening in the wider world.

One Response to “Interview: Matthew Thomas”