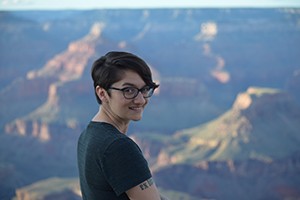 What’s your connection to the Midwest, and how has the region influenced your writing?
I’m originally from a small town in Wisconsin, went to college at the University of Wisconsin, then stayed in Madison until my late twenties. When I started writing seriously, I wrote about everything but the Midwest; I traveled abroad a lot, and wrote mostly about Europe and the people and places I encountered there. Then I moved to New York, the first time I had ever lived anywhere else, and suddenly found myself in this strange new part of the country, where people had Ivy-league degrees and whose parents had gone to college; who knew how to cook Indian food but had never had a hot dish; who had never been on a farm or heard a tornado siren or flew from a rope swing into a lake. And I suddenly found myself really thinking about the place I had come from, maybe for the first time. After two years of being away I looked down at my work and discovered that pretty much everything I had written—and everything I would continue to write—was somehow related to this place, which I still call home.

What do you think is the most compelling aspect of the Midwest?
As I think is probably pretty evident in Driftless, I’m completely fascinated by the Midwestern landscape; it’s something I carry with me everywhere, and that eventually makes its way into most of my writing. I’m also fascinated by the weather, and in particular tornadoes, which I’ve been obsessed with since I was a kid. But the more I consider it, I think the people might be the most compelling part of the Midwest. There’s this cliche about Midwesterners that we’re all raised to be tough, stoic, and emotionally reserved (read: removed, repressed, stunted, etc.), and I think that’s actually pretty true for the most part, and is certainly true of me and a lot of the people I love most. But Midwesterners also have this huge, historical and cultural capacity to be generous, and to take care of people, and to make the absolute best fucking comfort food (can I just give a quick shout-out to deep-fried cheese curds and tater tot casserole?), so there’s this really fascinating juxtaposition that exists, one I’m constantly confronting in myself, and exploring in my writing.

How do your experiences or memories of specific places—such as where you grew up, or a place you’ve visited that you can’t get out of your head—play a role in your writing?
Country roads are something I’ve been returning to a lot in my work recently—those I drove as a teenager and a young adult, the ones I still know by heart. I think a lot of my memories of growing up still live on those roads, so when I’m trying to mine the depths for an essay or story, to recall certain places or people or periods in my life, I imagine driving on them—mostly at night, dodging deer and hyper-focused on the S-curves ahead of me, the dark cornfields and farmland all around me—and it starts to jog the memories. I close my eyes and imagine myself behind the wheel of my mom’s little five-speed Saturn, or either of the cars I totaled as a teenager, and the roads eventually take me somewhere.

Discuss your writing process — inspirations, ideal environments, how you deal with writer’s block.
Landscape inspires me. Place inspires me. Language and cultural traditions and rituals and familial stories inspire me. Memory, history, and trauma are things that I feel like I’m constantly exploring in my writing. I have a great little office in my apartment with a great little desk, but I tend to do my best work at my kitchen table in the mornings, or on particularly cold and gray afternoons, with coffee or a beer and probably my fat cat in my lap. Otherwise I like to work in a coffee shop in my neighborhood, particularly if they’re playing electronic music. I’m also a musician, and playing music helps me refocus and channel my creative energies when I’m feeling burned out on or frustrated with my writing—which, it turns out, is pretty much all the time.

How can you tell when a piece of writing is finished?
Oh, nothing is ever finished. I suppose if I get something published I consider it mostly done, at least in that iteration, but until then I will work and rework a piece endlessly. It think it’s probably a good quality to just be able to be finished with something and walk away; unfortunately, I don’t think I possess that particular quality. I tend to obsess and analyze and revise to a fault. (This is probably why I’m also an editor.)

Who is your favorite author (fiction writer or poet), and what draws you to their work?
There are just so many, and they change all the time depending on whatever my current fascination/obsession might be. But Nabokov, Dillard, Sebald, Murakami, and Eliot; Marilynne Robinson and Lorrie Moore and Nick Flynn. The writer I most consistently return to, though—who probably inspires me more than any other, who I had the honor of studying with and who taught me a great deal about both writing and life—is Jo Ann Beard. If you love Midwestern writing and haven’t yet read her essay collection The Boys of My Youth, you must do so immediately.

What’s next for you?
I’m working on a collection of essays about—you guessed it—the Midwest! Including further explorations on landscape, plus food, tornadoes, sports, Nazis, insects, memory, and more. My band, Self Help (which of course was named after the Lorrie Moore collection), is also releasing our first full-length record soon.

Where can we find more information about you?
I’m an occasional public nuisance on Twitter, @melissafaliveno. You can also follow my band and our exploits at facebook.com/selfhelpmusic.