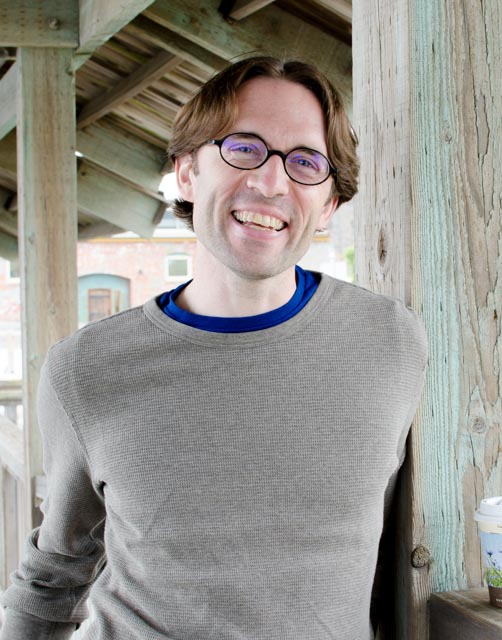 Though I now live in central Pennsylvania, I identify firmly as a Midwesterner. My family moved from the Pittsburgh area to Dubuque, Iowa when I was very young, and after another stretch in Pittsburgh we moved to southwest Michigan, where I lived for ten years. I went to college there, fell in love, got married — it’s where my adult life began. And that included writing. Most of my stories are still set in Holland, Saugatuck, Kalamazoo, Chicago (where my family now lives), or in little towns between towns, like Plainwell, MI, where I went to high school. When I write, I find myself standing on the eastern shore of Lake Michigan, searching the horizon for the next thing to appear, even if it’s just the up-lit glow of Milwaukee and Chicago on the low clouds once the sun goes down.

The Midwest holds broad vistas — a stubbled cornfield in midwinter or a Great Lake — and small details you notice only by living with them daily — the barn that lists a little further with each passing year, the aluminum rowboat marooned deep in the woods, the little red sign with white letters along the roadside that reads only “The Little Red Sign with White Letters.” I always appreciated Harry Callahan’s saying that since he didn’t have grand landscapes to photograph, he had to train his lens down — on people, on debris washed up on the lakeshore, any small thing that could be composed. As much as I love taking in a vast expanse, I love even more that the Midwest taught me to notice everything small. The small is where the stories are. Not in a whole life, but in a moment in an afternoon, or a series of those moments.

If I write a house into a story, it’s a specific house — one I lived in, a friend lived in, or one that for some other reason I visited often. I’m sure I could write some original architecture, but the houses are there waiting for my characters to move in, just like the towns or country roads where the houses stand. I might not always name a specific place, but it’s specific to me all the same. I most often begin a story with both a place and the people in it, and those almost always have some relation to the world I know, even if it isn’t my own world.

I need to look out a window — just to be able to look up and see something beyond what I’m putting on the page. That helps me to pause so I can keep going. My hope is always that I can keep up with the story, the characters, and their lives and do my honest best for them all as I draft and revise. If I don’t feel I’m doing that, I might walk away for awhile and come back to a story — days or even years later.

I don’t really treat anything as finished till it’s been accepted for publication, and I’ve occasionally kept on revising a published story, but I do consider myself “done” with a story if I feel like I’ve told the truth of it and done so to the best of my ability. When it takes a while to find a home for a story, I figure it must not be done, it must not ring true yet, and keep going back to it to see if I can do the job better. This often means that it simply takes me time — maybe a long time — to get a story where it needs to go.

If I have to pick one, Carson McCullers. No one does a better job of writing from a child’s point of view with all the richness and humanity the characters deserve. Also, she has the best titles. If I can pick a second, John Le Carré — because even the most lyrical story needs a structure, and there’s no better teacher.

My fiction chapbook, Field Trips with Exceptional People, is forthcoming from Red Bird Chapbooks, of Saint Paul, MN, in summer 2016. It’s a collection of short-shorts including such adventures as “Traveling by Hot-Air Balloon with Robert Downey, Jr.,” “Washing Skyscraper Windows with Janet Reno” (this one takes place in Chicago), and “Record Shopping with Arnold Palmer.” I’m working on a full-length collection of the same title as well as writing other stories that do not include celebrities as characters.

I’d like to know the same thing. It’s why I write stories, and I hope if I write them well enough, I’ll find out.