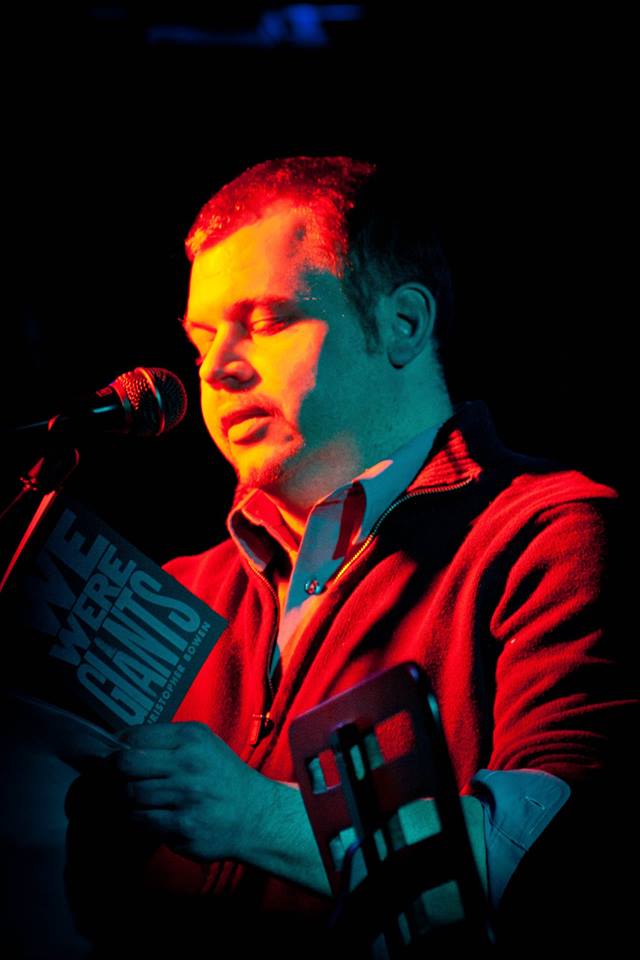 Midwestern Gothic staffer Audrey Meyers talks with author Christopher Bowen about his book, When I Return to You, I Will Be Unfed, making life work for oneself, life lessons from the publishing industry, the complexities of writing about mental illness and more.

**
Want your own copy of When I Return to You, I Will Be Unfed? We’re giving away three copies of the book — find any of our posts about the giveaway on Twitter and retweet to be entered to win. Only one book will be awarded per person, but feel free to RT as many times as you want to get multiple entries! Deadline is Saturday, 1/14 at midnight. US only please.
**

Audrey Meyers: What’s your connection to the Midwest?

Christopher Bowen: Well, I was born in Cleveland in 1980. My father entered med school when I was 7 or 8 and my family was literally living on a string then, though I never knew it from all the love we had. We moved to Toledo, Detroit and back to the Cleveland suburbs throughout his career.

I suppose that’s where all my love of road trips first came from. That and Kerouac, ha. But I’ve also often felt so entitled to the land, to the ruggedness of its people. So much of the Midwest, the rustbelt even, is so hard earned.

So, I suppose, in another lifetime I would’ve graduated at four years with an English degree and gone on from that. But I didn’t. I had to make life work for me, for the environment around me, and those awkward mistakes I would make over time. That, specifically, meant graduating with my culinary degree in 2013 at a community college in Cleveland at thirty-three.

AM: In your previous interviews, you mention your many travels throughout the country. Which of these journeys have impacted you the most and how does it compare to the influence of your home base – the Midwest?

CB: I travel so much mainly because the cost of living here in the Midwest is so low, it affords me to. Last year though, I went to Arizona to visit family and we camped in the Superstition Mountains. I also read for the Flash Fiction Festival in Denver. Both really made me fall in love with the west, with mountains. Even just the picture of them and what they represent in life.

Though I saw some when I travelled the coast with my friend Jane (also an author), I am thinking of maybe settling in Colorado or the Rockies somewhere someday.

AM: In addition to being an author, you are the founder of Burning River, a publishing press. What are the greatest lesson you’ve learned from starting your own publishing press?

CB: The best answer to this, the one thing I’ve learned, is nothing shorter than a lesson in life. I mean, something you can only get from living life and not necessarily ‘publishing.’ To remain humble and honest. It’s something that’s carried me through my career as a chef, something a lot of people sometimes note once they’ve met me or get to know me more in person. There’s a hard earned character to that and a lot of hard mistakes made.

Have you ever seen the movie, The Big Kahuna? The best picture I can paint is Danny Devito’s ending monologue about regret and having made mistakes that you haven’t even realized yet.

So, yeah, I published journals, chapbooks…ran my own blurbs or reviews of others’ books over the years on my blog. I paid for the physical design of the books through school grants and even, sometimes, there we made mistakes. But I started it because I wanted the mistakes as much as the experience, as hard as that is to say. Most importantly, I was able to grow through those people I met as I worked with them and meandered through small publishing.

I’d like to think those same people would appreciate me as the growth of a person and man, and not necessarily that of a writer.

AM: Your book, When I Return to You, I Will Be Unfed, treats the difficult topic of mental illness. What made you want to write about mental illness? And how did you cope with covering this complex topic within a short and compact book?

CB: I wrote about mental illness because of the world’s stigma and my own personal experiences with it. How limited we make our lives or perspectives, not only in judging people or unseen illnesses, but also in forgetting to share that part of ourselves with other people we meet in life. That these are missed chances, missed conversations, that deeply connect us to each other as human beings.

It originally began as a project for NaNoWriMo years ago before I’d even finished school. After so long, I realized it had become much more personal and not only had to see print and be read, but that it was my duty to do that for others’ sake, whether facing something similar or simply because of my habit of being so honest in my writing.

AM: When I Return to You, I Will Be Unfed features an interesting narrative style with multiple viewpoints. What are your reasons for switching point of view throughout the story?

CB: I really just wanted to show an ‘inside’ and an ‘outside.’ Inside a hospital, outside the world, or a society. This included friendships that at that age are really critical to identity. I suppose that’s why it became such a narrative of Rob and Jim’s friendship, but mostly Jim.

AM: You’ve written a number of short stories. Where do you find inspiration for starting new work?

CB: Patience and free time, honestly. If I really think long and hard about a concept, a relationship, a predicament, I really just want that person explained to other people: their wants, their hurts, desires. The story ends when my gut tells me it does and I walk away from it as ‘finished.’

AM: What do you wish you had known before you began writing?

CB: When I was younger, I read so much and became the quiet kid in school for a lot of reasons, but mostly the moving we did. I was a good observer and I always wrote creatively, but a small part of me, a small sliver, dreamt of being some great, dead author and that some small part of me, my writing, would persist through my own personal life and death.

But what I’ve come to learn is that writing is second-hand. That being heard and read and published and remembered are all a great feeling, but that you, the person, your family, your friends, your experiences are so much more that matters in this lifetime. It’s honestly one of the biggest reasons I travel much anymore, to put that faith to the test. To test the boundaries of my own life experience.

CB: I’ve whittled a small story down to bare bones and am planning on expanding it. It will likely expand again, then I may retract it more. But a lot deals with the complexity of the father-son relationship, masculinity, even the deeper meaning of simply ‘water’ in our world, fluidity. I suppose a lot of the inspiration comes from reading Robert Bly’s Iron John and my own relationship with my father.

I’m also considering working on a text about an inspirational musician for me, Justin Vernon of Bon Iver. After all, the band’s name is a play on the French for ‘Good Winter.’ And in all honesty, I’m hoping it will be.

Christopher Bowen is a Midwestern chef and the author of the books We Were Giants and When I Return To You, I Will Be Unfed. He blogs from Burning River.