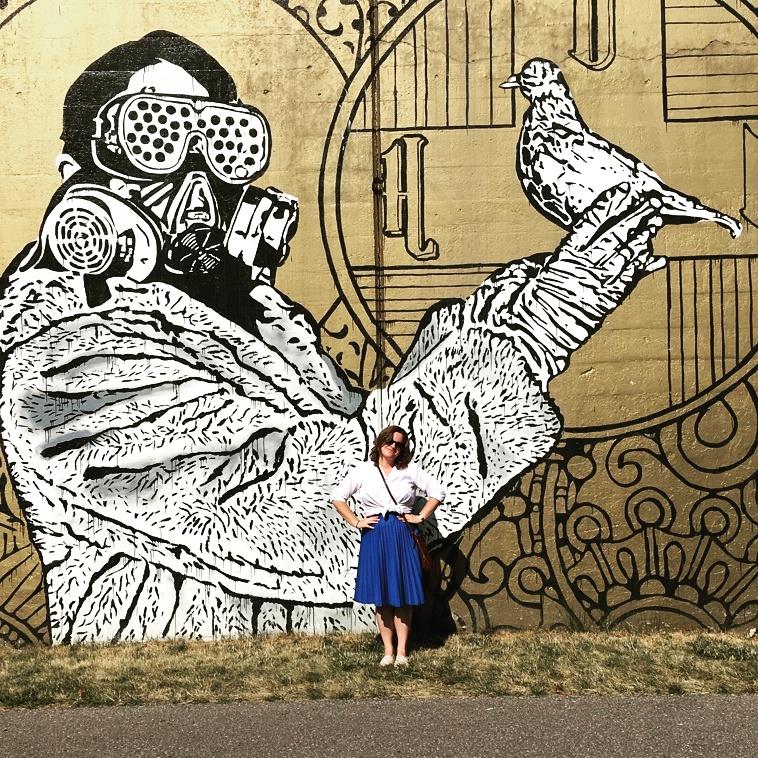 I’ve lived in the Midwest my entire life. I was born in Flint, Michigan when General Motors was closing factories and the city was evolving into that particular Roger & Me, “Murder City” shape it’s recognized for now. I went to grad school in Lafayette, Indiana, where I developed a taste for frozen custard, took many long bike rides through the wind farms, and learned what corn smut is, and that I’m allergic to it. I live now in St Louis—a place that, from certain angles, reminds me of home, but that is very much its own place with its own particular contradictions. My fiction is set obsessively in Flint with occasional jaunts to Detroit. I’m currently finishing a novel-in-stories set in Flint from the 1937 Sit-Down Strike to the water crisis.

I’m fascinated by the boom and bust stories, and how the collision of money and politics shapes and reshapes cities, effects people and families. Flint in the 20th Century experienced dizzying extremes. When General Motors took off, the population increased so rapidly that workers camped outside the factories until GM built neighborhoods for them to live in. Though it was very segregated, Flint was a major draw in the Great Migration, and became the first major American city to elect a black mayor, Floyd McCree. By the post-war “Generous Motors” heyday there were 200,000 people in Flint. After decades of white flight and deindustrialization, there’s less than half that now. You feel Flint’s betrayal—by General Motors, by Michigan politicians-in vacant houses and steamrolled factory lots, in the inhumanity of the Flint Water Crisis. But you feel its defiance and resilience, too—the tenacity of people who’ve chosen to stay, who resist the apocalyptic narrative of Flint.

My sister lives in Detroit now, and the last time I visited, when I wanted to drive by the Packard Plant, she teased me about my impulses being so 2010—ruin porn is passé and entrepreneurship and creativity are the new chic. Of course I’m excited to see signs of vitality in the places I love– and I’m a millennial with hipster leanings, so I’m all in for locally-sourced vegan food and yoga studios. But those ruins, those ghostly remains of other people’s homes and livelihoods, still resonate for me. Every time I come back to Flint more of the groceries and coney islands of my family’s westside neighborhood are shuttered, but there’s a wine bar and a creperie downtown. It’s a surreal cusp, between decay and revitalization.

Much of my writing for the last few years has explored Flint’s history, and has been informed more by research and imagination than my own experience. Often I’m struck by some detail– a spooky picture of AutoWorld, an article about Flint’s quickly-extinguished 1967 riot—and I make an imaginative leap from there. For instance, the story in this issue started with a moment on Flint’s timeline — the Sit-Down Strike, 1937- and a very simple question: what would it have been like in Flint at this time for this person? “The Union Makes Us Strong” is (very loosely) inspired by my great-grandparents, who died years before I was born. My great-grandfather was a traveling cookware salesman who supported a wife and nine children through the Depression. I wondered what it would be like to be in Flint during this defining moment, but to be outside the GM payroll. I spent a lot of time listening to oral histories online, walking through Flint’s wonderful Sloan Museum, watching the documentary With Babies & Banners, about the Women’s Auxiliary Brigade, for the umpteenth time on YouTube, reading whatever I could find. I like gathering other people’s memories and perspectives, then letting my imagination play among those voices.

In the last year especially, with so much about Flint coming to light, and with all the shock and heartsickness and fear I’ve experienced on a personal level, I’ve felt a great sense of urgency. I don’t have any fussy rituals. Just quiet and time.

I get to a place in a draft where I feel a niggling suspicion I’ve expressed an idea as fully and vividly as I’m capable. I find myself reading pages aloud to myself, picking at verbs, worrying over syntax. After I’ve fretted long enough I send it to my friend Natalie Lund, who’s a talented fiction writer and shrewd editor, and usually she points out one of my blind spots and sends me back into another round of revision. But on the rare occasion she tells me a story feels solid, I fret over the sentences a while longer, then I drop a shot of Sailor Jerry’s into my Vernors and hit Submit.

I admire writers who are unabashed about their obsessions—writers who return again and again to a certain landscape, a certain theme. I love Zadie Smith’s novels, and how she’s investigated her corner of London from so many angles and perspectives, but always with so much empathy and wit and grace. I go back to Jeffrey Eugenides’ Detroit novels often, for the way they place characters and families against the cityscape so that you feel Detroit as richly as you do the characters. The chapter in Middlesex where Desdemona works for the Nation of Islam is the, ahem, Cadillac of Michigan prose as far as I’m concerned.

I’m currently the Hub City Writers Project writer-in-residence. I’ll be spending the first part of 2017 away from the Midwest for the first time, in Spartanburg, SC.

I’m bad at the internet, but there are some things at www.kelseyronan.com.