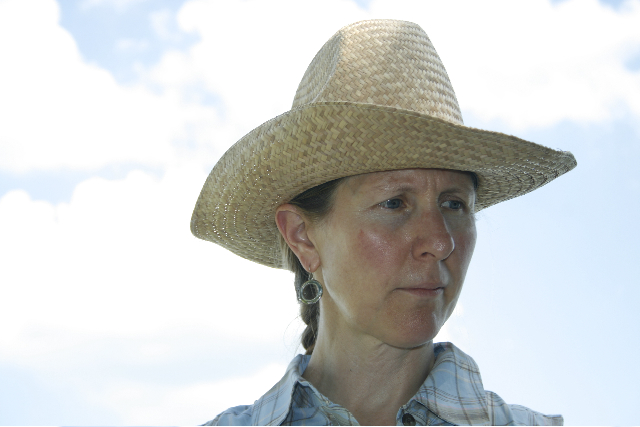 Bonnie Jo Campbell is a National Book Award-nominated author with a strong tie to the Midwest. She talks with us about being influenced by the region, how social media plays a part in her life, and having a beer named in her honor.

MG: Can you tell us a bit about your connection to the Midwest?

BC: I was born in Michigan, and I now live in Michigan. I have lived in the Midwest forty five of my forty eight years. I feel most at home with the people of my region, and when I go to New York City or Oregon, I find that my favorite people are the displaced Midwesterners.

BC: I have been trying to write since I was fourteen. I gave it up over and over again as a serious pursuit, but then came back to it and tried to write some more. I finally figured out how to write in about 1994, when I was thirty two, while I was studying in a mathematics PhD program. I got my master’s degree in math and headed over to the English Department where Jaimy Gordon was teaching.

MG: How has the Midwest influenced your writing?

BC: In a thousand ways. My places and people are all Midwesterners. In fact, most of them could have come from Comstock, Michigan, my home down. I have a Midwestern sensibility, and I find that life here makes sense, and that’s the sense I work with in my stories.

MG: Your short story collection, American Salvage, was a finalist for both the National Book Award and the National Book Critics Circle Award. How has that changed your outlook on writing (if it has at all)? Do you find your approach to writing has changed with the accolades you’ve received?

BC: Well, it was a great pleasure to have folks like my book, and that goes for New York City critics as well as my brother the plumber, my brother the custodian, and all the other people I encounter around here. I don’t think my approach to writing has changed at all. Starting a story is still just as confusing as it always was, and my anxiety about making the story good enough is just as powerful. I still have a recurring eye twitch. Every finished story still feels like a miracle. I just finished the proofreading on my new novel, Once Upon a River, and having finished it absolutely feels like a miracle. Now I’ll start hoping that people like it.

MG: Can you tell us about first getting published with your collection Women & Other Animals?

BC: I won the AWP short fiction award in 1998 and so the University of Massachusetts Press published the collection in hardcover. What a thrill! Diane Glancy was the judge. All contests are a crapshoot, in the sense that you have to hope for a judge who will appreciate your work, but all writers with a finished collection need to enter contests, because it’s the best way to get a collection published.

MG: Did you have to find an agent? Was it hard to get noticed?

BC: Because my collection got a starred review in Publisher’ Weekly and because I had a novel ready to go, I was able to get an agent. Winning a well-established contest helps a person get noticed, and a starred review really helps.

MG: Have you found it’s more difficult to write shorter stories, or novels?

BC: Novels are harder because they’re longer. Seriously. I approach both the same way.

MG: What are your thoughts on the state of the publishing industry? Do you have an opinion on self-publishing vs. traditional publishing?

BC: I love all the options for publishing nowadays. I also feel the frustration of many friends who are having trouble getting published in traditional ways. Right now, it’s working out for me that a big publisher has an interest in me, but I know that might not always be the case. I’m also interested in university presses, small presses, and for some projects, self-publishing. For every project about which we are passionate, we have to weigh all the publishing options and hope we can find a way for our miracle to make its way into the world and into the hands of folks who will appreciate it.

MG: How do you feel about social media (such as Facebook and Twitter) used as a tool to promote one’s work?

BC: I’m not sure how I feel about it, but I use those methods to communicate with friends and fans. I enjoy Facebook and Twitter, and I don’t know if I’m using them to my advantage, but I’m a person who loves to communicate with other people, and so I enjoy having newfangled ways to do it, and if it helps promote the book, then that’s great. I also have a blog called “The Bone-Eye” that I’m trying to update three times a week, so show people what a Midwestern writer’s life is really like: http://www.bone-eye.blogspot.com/

MG: You have a new novel coming out this year, Once Upon a River. What can you tell us about it?

BC: It’s about a girl who loves the river and tries to make her life there when her family fails her. It contains elements of a story from my first collection (“The Fishing Dog”) and American Salvage (“Family Reunion.”) So I guess you could say that I’ve been writing this book since 1995 when I took my first writing class with Jaimy Gordon, for that is where I first wrote “The Fishing Dog.” It’s also a pre-quil to my first novel, Q Road, and is about the mother of the protagonist in that earlier book. Booklist just gave it a starred review, so I’m pretty cheerful about that.

MG: You had a beer named after your novel Q Road at the Kraftbrau Brewery in Kalamazoo. That has got to be one of the best accolades a writer could receive. How did that come about, and how did you did you feel when they told you that was happening?

BC: I love my home town; people here have supported me in so many ways. Kraftbrau no longer exists (R.I.P.) but they were very sweet to do this for me. A few friends and I were sitting and chatting over beers, and Peter Brakeman, a local designer, pointed out to me that he’d designed beer labels for Bell’s Brewery. He said my book cover mock-up would make a good label. So he designed me a label, and I suggested to Kraftbrau (where I was having my book release party) that maybe a special beer was in order. They ran with it. I was very honored.

MG: You seem to have held a wonderful variety of jobs (including traveling with Ringling Bros. and Barnum & Bailey Circus and leading bicycle tours in Europe). How have these life experiences molded your writing?

BC: Oh, heck, I don’t know. There are some experiences I’ve written a lot about (the circus) and some, such as practicing martial arts for ten years, that haven’t really made it into my writing. It seems as though a good idea to have a variety of experiences in this life, and working different jobs is a good way for a poor person to get a lot of different experiences.

MG: What advice do you have for authors both in and out of the Midwest trying to get their work noticed?

BC: Just keep making your work better, send it out into the world, and it will get noticed. Midwestern writers are getting published all over the place, as much as writers from other regions. We don’t have much confidence about our work, and sometimes we’re not as good as some other folks at promoting ourselves, but a lot of us have a really strong work ethic, and it has turned out for me that the key to writing good stories is simply to work really really hard. So work hard and work smart, and send that work out when it’s ready.

Find out more about Bonnie Jo Campbell at her official website.