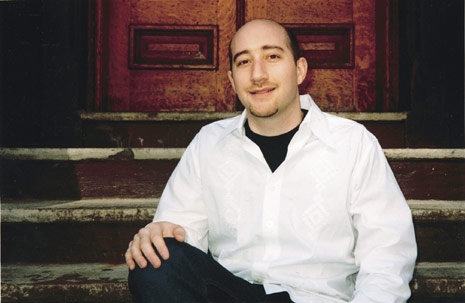 Aaron Hamburger is an award-winning author who draws heavily on his experience growing up in the Midwest. He talks with us about traveling the world, the state of the publishing industry, and his journey to getting published.

MG: Can you tell us a bit about your connection to the Midwest?

AH: I was born there and went to college at the University of Michigan, where I studied creative writing with some wonderful professors, including Eileen Pollack, who now directs the MFA program there.

AH: Since I was a kid.  I’ve always been a reader, and then I began trying to produce the stories I loved to read.  As I got older, so did the people I wrote about.

MG: How has the Midwest influenced your writing?

AH: Before I answer, let me just say that this is my particular experience of the Midwest, which is perhaps idiosyncratic and by no means conclusive.

I think there’s a certain emphasis on friendliness in the Midwest.  For example, if I go to the store in New York, where I live now, it’s perfectly acceptable to leave fifty cents on the counter, grab a newspaper, and walk out, without exchanging a single word with the person behind the counter.  By contrast, recently when I was in the Midwest, I was standing in line at the grocery store for a while listening to a lengthy exchange about the weather between a person buying diet Coke and the cashier.  There’s something nice about that.  So I like to take Midwestern characters who believe in those principles and plunge them into foreign territory where those same useful principles don’t always apply, like Mrs. Michaelson, the heroine of my novel Faith for Beginners.

I’d also say that going to college in Ann Arbor influenced my writing a great deal.  When I was there, and I suspect this is still true, there was a huge sense of literary community, a vibrant culture of readings, a great English and creative writing department, great bookstores, cafes, writing workshops.  There were lots of people around who cared about good writing, and it seemed easy to find each other.  Ironically, now that I live in New York City in the age of the Internet, I find it much harder to feel a part of a community like that.

MG: You’ve spent some time living in Czech Republic, which was the setting for your first collection of short stories, The View from Stalin’s Head.  How has traveling and experiencing different cultures influenced your writing?

AH: Actually, I think this may also be connected to the question of being from the Midwest.  At the University Michigan, I took a class on American literature from Professor Robert Weisbuch, who once said that one of the fundamental conditions of living in the Midwest was a desire to get the hell out of it.  I think as a kid I felt that way too, hungry to experience new cultures and different kinds of people, so much so that I think I failed to see clearly the unique culture from which I came.  In any case, I think that residual feeling of ennui with the Midwest explains in part why I like to write stories set abroad.

When I’ve lived and traveled abroad, I was always struck by how people would say things about me that I’d never believed about myself.  “You’re so American.”  Really?  What did that mean?  You could live in America all your life and never feel you were “so” American.   Or “It’s so obvious that you’re Jewish.”  It is?  How did they know?  I became interested in these identity questions and how people communicate aspects of their identity without realizing it.

MG: Has it made you more appreciate of the Midwest? Or Less?

AH: I think it has made me more appreciative of the unique qualities of the Midwest and specifically the Detroit suburb I’m from, West Bloomfield.  After getting to know Prague, for example, I would then come back home and think, okay, if I were foreigner here, what cultural norms would I have to learn to fit in and make my way around?  The things that once seemed annoying (for example, a lack of public transportation) then became descriptive, interesting.

MG: What kind of characters do you like (when either reading or writing) and/or do you identify with?

AH: When I read, my fictional heroes are above all sensitive.  For me, it’s not enough for a character to be intelligent or muscular or successful.  I want my characters to possess what I recently heard called “emotional intelligence.”  Characters like Margaret Schlegel or Fielding in E. M. Forster’s novels Howards End and A Passage to India, or Elizabeth Bennet in Austen’s Pride and Prejudice.  People who are earnestly trying to make sense of the world and cognizant of their own limitations in trying to do so.

I wish I could write characters like those, but when I create stories, I tend to be drawn to flawed characters that to me are all the more human for failing at the business of social interaction.  In other words, they’re outsiders, but not in the cool James Dean Rebel Without a Cause way.  More in the way of Miss Brill from Katherine Mansfield’s story of the same name.  Or Mrs. Bridge from Evan S. Connell’s novel Mrs. Bridge.  (Maybe it’s just eponymous characters I like?)

MG: How much do you draw on personal experience when writing?

When you’re near a writer, you should pretend you’re with a spy who’s trying to ferret out your secrets to broadcast to the world.  Anything said to a writer really does become fair game.  Some writers are extremely scrupulous about basing anything on real life.  I try to find a balance if I ever base anything on reality, using some details from life, changing others.  After I published my work, I was often surprised by things that people thought were autobiographical which were actually completely removed from my experience.

Not that I admit to ever drawing on personal experience when writing.

MG: Can you tell us about the road to first getting published?

AH: It feels less like a road than a meandering stream.  But when structured into a narrative, it does look like a road.  I got an undergrad degree in creative writing (and art history) at U of M, lived abroad, worked in publishing for a year in New York, got my MFA in fiction at Columbia, where I wrote a thesis that then became my first book, the story collection The View from Stalin’s Head.  When I graduated, I sent a couple of the stories to various agents, and one got back to me and took me on.  Story collections are notoriously difficult to sell, but in my case, it was easier to sell the book than to place the stories in literary magazines.  My agent had a good idea of an editor who might like my work, and he did.

This all sounds simple in the re-telling.  In the living, it was not.  It took years, and it felt very slow, as if I were wasting my life pretending to be a writer.  I often still feel that way.

MG: What are your thoughts on the state of the publishing industry? Do you have an opinion on self-publishing vs. traditional publishing?

AH: I have no idea where the publishing industry is headed.  Every time I think I know, the status quo changes.  Look what’s happening to that venerable Midwestern company Borders.  I’d say self-publishing is great if you’re a natural at selling yourself to the public, not exactly the typical writer type.  However, today, self-publishing may be going from an option to a necessity.  That said, no one knows where publishing is going, particularly the people who claim to know.  You just have to do the work that matters to you.  What the universe does or doesn’t do with it is a business question, and that’s all it should be, for your own sanity as a writer.

MG: What advice do you have for authors both in and out of the Midwest trying to get their work noticed, or get published?

AH: Write as much as you can for any venue you can.  Your local penny saver newspaper.  Your alumni newsletter.  Post on blogs.  Try to create a writing name for yourself any way you can.  Just as there are no small roles, only small actors, so too there are no “small” places to get published.  I’ve had things appear in prestigious venues that only a handful of people actually read, and then I’ve published stuff on my blog that a lot more people read and even resulted in their going out and buying one of books.  You really do never know.

But more important than any of this is simply to write, write hard, write well, write honestly.  Don’t stop for anyone or anything.  Read as much as you can to get inspired and get better.  Travel to dark, secret places in your work and expand your knowledge of vocabulary, grammar, and syntax so you have all the tools at your disposal to express your vision.  Good writing gets noticed, and sometimes it gets published.  The same is true of bad writing, but writers are so little paid and read these days, is it really worth it to become recognized for bad, insincere, shoddy work?

MG: Where can we find more information about you?

AH: On my website, www.aaronhamburger.com or my dessert blog www.aaronsweetspot.com. Or just read The View from Stalin’s Head or Faith for Beginners!

One Response to “Interview: Aaron Hamburger”