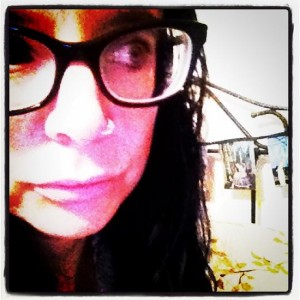 Midwestern Gothic staffer Jamie Monville talked with author Sarah Elizabeth Schantz about her debut novel Fig, what draws her to magic, being a visual artist, and more.

Sarah Elizabeth Schantz: I lived in Minneapolis for a few years back in the mid 90s, and I’ve spent a fair amount of time in Chicago. Otherwise, I travelled a lot as a teen and young adult, hitchhiking and hopping trains, and because the “Heartland” is as vast as it is, it was the most constant landscape. I remember hopping trains through the Dakota’s and being surrounded for days by sunflower fields. It was surreal. I also recall hopping trains from Little Rock, Arkansas into Columbus, Ohio in early April and almost freezing to death (or at least that’s how it felt). We got kicked out of the yard in Columbus because I was a girl and the workers were concerned I’d get hurt. My boyfriend and I were irritable from the long, cold ride, and as usual, were bickering as we headed for the interstate under the weight of our massive packs when this guy pulled up, and invited us to his house to eat and clean up. He had two little girls strapped into car seats in the back, so we weren’t scared of him, and obliged. He was one of the first truly nice (and generous) people I met in my time travelling, and I’ve met a lot (and most of them were in the Midwest). He took us to his house, fed us, let us shower, gave my boyfriend a brand new pair of work boots and me a good pocketknife. He let us hang out all day, but we had to go before his wife came home (I’ve always wondered how he got the kids not to tell her about the two dirty train hoppers they’d played with all day). He bought us a big bucket of KFC and dropped us off by the on ramp so we could continue on our way to Philadelphia.

JM: What was the inspiration for your debut novel Fig?

SES: Probably my house. I first wrote the short story, “The Sound of Crying Sheep” (that would become Fig) sometime soon after we’d moved in. We live in this old two-story farmhouse on the outskirts of Boulder, CO and if you don’t look toward the west, you might as well be in Kansas. Fig’s voice showed up, and her family farm soon followed, as well as all the issues regarding mental illness. From there, the inspiration quickly turned into research, and thankfully the research I did around schizophrenia, skin picking disorder, and the secret language of flowers became an endless source of inspiration as well.

JM: In a blog post you write about how certain elements of your childhood: your experience of Challenger; creating the Calendar of Ordeals show up in Fig, not as autobiography or memoir, but as emotional truths. Do you use these experiences and images as a way to deliberately craft an emotional truth, or do they end up coming out more accidentally as you’re writing through a scene, searching for that truth?

SES: The Calendar of Ordeals was the first emotional truth that showed up, pretty early on, and for a very long time the novel was actually titled this. When it showed up, it was by accident, or perhaps by slippage for lack of a better word. The concept ended up shaping the entire book, and that was when I realized it was a countdown novel. Because Mama was nineteen when her schizophrenia first manifested, Fig worries she will also inherit the disease at this age. Therefore, I arranged the book as a count down from age six to age nineteen. However, as I continued to write the book, I realized inheriting the disease was not Fig’s only concern, or even her biggest one. Rather, she wants to save Mama from the mental illness, and she tries to do so via the ordeals. Calendars in general became an important component of the book, especially since the vignettes are all arranged by date, and from there events like the Challenger just naturally showed up. Fig is one year older than me, and initially I think I did this because I didn’t want to write about computers or cell phones. Had Fig has access to the Internet, her life would have been vastly different. I’m not sure she would have been as lonely, as isolated. Then again, all that information at her fingertips might have driven her insane. 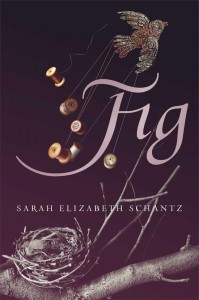 JM: Did you know that Fig was going to be a YA book when you set out to write it, or did it just end up that way?

SES: To be absolutely honest, I don’t think I’d ever really heard of YA until my agent first mentioned that it might be a possible way to market the book. So the answer is no. I was writing what I like to read—the classic bildungsroman—the coming-of-age tale. I joke about this a lot, but I wonder had Harper Lee published To Kill a Mockingbird in this day and age with the whole YA boom, would it have also been marketed this way.

JM: According to your blog and etsy site, magic is very important to you. Can you explain how magic is part of your writing process, if it is, and what draws you to it in the first place?

SES: The idea of magic saved me when I was a child. Zilpha Keatley Snyder was the one to introduce me to the Occult (coincidentally via her book, The Headless Cupid, and where I got the idea for the Calendar of Ordeals). But I also devoured The Egypt Game, The Witches of Worm, The Velvet Room, and The Changeling. As a result, I not only got into witchcraft, but Egyptology, and The Great Depression. I didn’t have any friends, especially not at school, and her books helped fabricate a world for me to belong. Her magic is different than the magic we see in the Harry Potter books. The magic that pops up in her stories, pops up to save the kids that were like me.

While I am a witch, and I celebrate holidays like Samhain and Beltaine, I’m more interested in magic as a manifestation of will, or as the power of visualization, just as I’m more interested in the METAPHOR posed in myths like Persephone and her descent. Do I think that she really returns to Hades every fall to reign over the dead, no, but I do understand all the layers of what this story means. It’s a metaphor for the turning of the seasons, just as the Triple Goddess represented by Persephone, Demeter, and Hecate, point to the three stages of womanhood. And the layers of meaning don’t stop there. They keep going. The myth is another coming-of-age tale, and it’s about sex and relationships, about the shadow self, and so much more.

As far as my writing goes, it is tinged with magical realism, and I do keep an altar to whatever book I’m writing. In fact, I’m about to take Fig’s altar down to reassemble it at the library as a month long display. It includes everything from the books I used for research to the little figurines from the fairy tales I used to plot Fig to the mock-up of The Calendar of Ordeals I used in the book trailer to little notes from my editor and other memorabilia.

JM: You are also a visual artist. How do you see these two different crafts connected? Does one mode of expression ever help you with the other?

SES: People ask me this a lot and I think I always disappoint them with my answer. I actually feel my visual art is very separate from my writing. The process of creating a collage or a pen & ink drawing is very different than writing, mostly in how it feels. Writing is so cerebral whereas visual art is less so (and that doesn’t mean I don’t put a lot of thought into my art).

I do think my writing is very visual. I spend a lot of time on setting, painting the landscape with words, just as I spend a lot of time on the portraiture of my characters, but I also spend an equal amount of time on getting the sound and rhythm of my sentences just right. I think this is why my writing gets described as lyrical as much as it does, which is funny since I’m not really a poet, and I couldn’t sing in tune if my life depended on it.

SES: You know, I literally grew up in a bookstore, and I was surrounded by writers my entire life, so I think I went into writing knowing exactly how hard it would be. I knew it could take a long time to find my voice and I knew that even after I had, that publication was still a crapshoot. I knew it took perseverance and determination, and I knew that a lot of writers were alcoholics or depressed. I knew from a very young age that Hemingway had shot himself and that the success of To Kill a Mockingbird had crippled Harper Lee from ever writing more. I had a professor back in grad school tell me it took an average of ten years for anyone to become a master of a craft, and that’s about how long it took for me to get to where I am now. But again, I expected that. I guess the one thing I didn’t expect, even though I’d been warned, was how the reviews would make me feel. Fig hasn’t really gotten any bad reviews (knock on wood), but sometimes I’m surprised at how much certain people misunderstood the book. That said, they are the minority compared to the people who truly got what I was doing.

SES: Along with generously publishing the short story that would become Fig, and three excerpts from the book, Midwestern Gothic also published one of my stories, titled “Sister.” This story has given birth to my second novel, Roadside Altars. I’m currently rewriting the first manuscript form of this book. When I sat down to write it, I still had Fig’s voice in my head so I tried to write Roadside in third person. It didn’t work. I have gotten about 75 pages into the new draft, in first person, and Fig’s voice is gone—it’s no longer a problem. The main character, Krystal Rassat, is a tough metal head trailer park girl from Sacred Heart, Minnesota who is haunted by the ghost of a sister she mostly absorbed in utero—a syndrome known as Vanishing Twin. She swears a lot, is crude, corrupted, and very sarcastic. But like Fig, she is caught up in the drama of her family, is dealing with mental illness issues of her own, and is wise beyond her years.

Sarah Elizabeth Schantz literally grew up in a bookstore and was raised by a family who worshipped good books in lieu of gods. She is an accomplished short-story writer with many awards under her belt. Schantz holds an MFA in writing and poetics from Naropa University. She currently lives with her family in an old farmhouse on the outskirts of Boulder, Colorado where they are surrounded by open sky, century-old cottonwoods, coyote, and screech owls. Her first novel, Fig, just came out from Simon & Schuster.