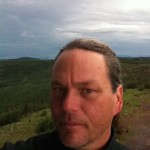 John Yohe’s piece “The hunter down the road” appears in Midwestern Gothic‘s Summer 2017 issue, out now.

I grew up in Jackson, Michigan. It’s a quiet place to grow up, but has no economy, like Michigan in general, so people have to leave, economic refugees. I’m not sure regions influence us so much as just appear in our work because that’s what we know.

If you mean the land, then the Great Lakes. Or the snow. The quietness after a big snow, the burrowing inward. If you mean something else… I’d say the Rust Belt and all that implies: the abandoned factories, the general dismal economy.

You of course write about places you know. Interestingly, I tend to write about places after I’ve left them. But I travel a lot, move a lot. The poem you’ve accepted was written in New Mexico. I think. Or Oregon? Not Michigan though.

Just reading a lot inspires me. Writers should read a lot. I tend to write in spurts: I can’t work on something for years, even longer stuff like a novel: If I’m inspired I try to knock out the rough draft quickly, though then may let time go by. Poems too: The general draft comes out quickly, then I’ll spend time tweaking. Though I think you have to let stuff sit away for at least a little while, in order to come back to in with fresh eyes/ears.

I’ll tweak things for years, but really I just go on with other stuff. After a while, you just have to think “good enough” and move on. That said, there are poems of mine from fifteen years ago that I still like (not all, just some) even with their imperfections. But I also realize that I get better as a writer as I go on, everyone does. But I’d say only about fifteen to seventeen years ago was where I really started to keep works, to feel I was someone good enough. And, I still write crap….

Charles Bukowski. For his poetry and his fiction. He’s from the Hemingway lineage of clear language, but also has an irreverence I love, and need. I feel joy when I read him, and his whole attitude towards the so-called American Dream, which is that it’s a lie.

Survival. Finding a job that’s meaningful and not time-consuming. But if you mean writing, I’m working on a novel about the metal scene in ’80s Jackson. I continue to seek either an agent or a publisher for some books of poetry and some novels. That goes in spurts—I get energized, then feel despair and stop. It’s hard, knowing the Big 5 publishers probably don’t want my stuff, and that the indie publishers are inundated with writers like me, so why would they even notice? But the process of writing is interesting, powerful, and I guess I have enough ego to keep thinking people might like my stuff. I get individual pieces accepted on a regular basis, and that’s gratifying. Still, it’s madness… all of it….