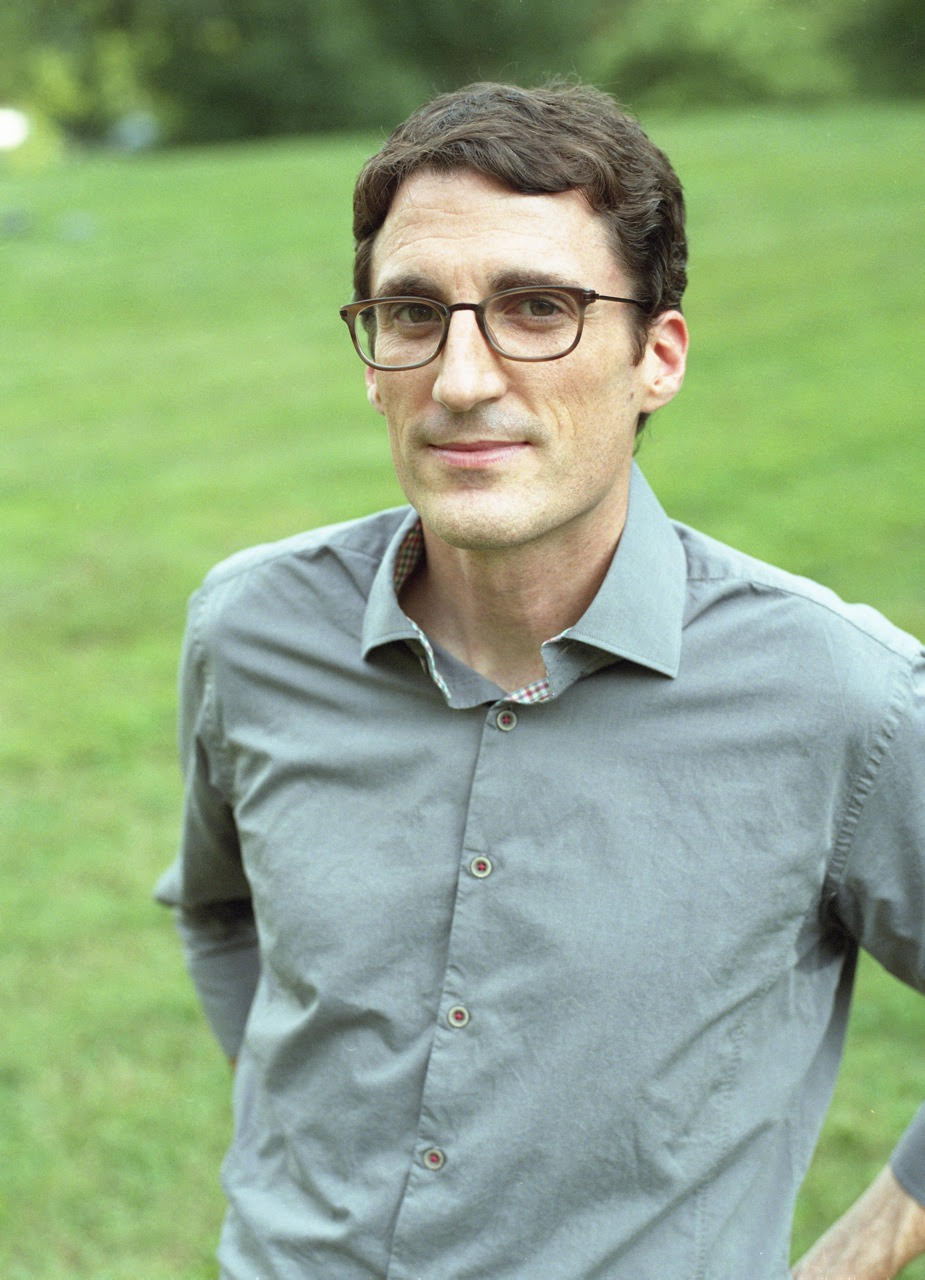 Midwestern Gothic staffer Meghan Chou talked with author Edward McPherson about his book The History of the Future: American Essays, shaping an essay collection, the multiple perspectives of history, and more.

Edward McPherson: For the past five years I’ve lived in St. Louis, where I teach at Washington University. (I married someone from Missouri, so before that I had visited the state a fair amount.) I also spent four years in Minneapolis. But I moved there after eight years of living in New York City, and I was born and raised in Texas, so my connection with the Midwest remains that of a curious outsider.

MC: The History of the Future features seven essays, each set in a different city of the United States: St. Louis, Gettysburg, Los Angeles, New York, the Trinity site, North Dakota, and Dallas. How did you decide which cities to focus on and what significance does each hold to you personally?

EM: I wrote the book one essay at a time, desperately hoping the whole thing might cohere into something greater than the sum of its parts. I started out wanting to write about Dallas, my hometown, because I hadn’t written much about it and I thought it was interesting that they were rebooting the famous TV show (Dallas) just as the city was nearing the anniversary of the Kennedy assassination. Who shot JFK/Who shot JR? (Alienation, anger, conspiracy… How do we handle history that refuses to stay in the past?) From there, I just followed my nose to whatever place felt most compelling. Not every idea worked out, but soon a pattern emerged: I was interested in the ways that the past might intrude (unexpectedly, uncomfortably) into the present. The subject matter kept shifting, obviously—the book is a collision of disparate topics—but in all the essays, I was either returning to a place I knew well (and had a personal connection to: Dallas, Gettysburg, New York, St. Louis) or posing as a tourist (as problematic as that is) in order to see something I felt I needed to experience firsthand (the site of the first atomic detonation, the oil fields and man camps of North Dakota, doomsday bunkers in Los Angeles, etc.). So I baby-stepped my way to a book; it took five years and got darker as things in this country seemed to take a grim turn. 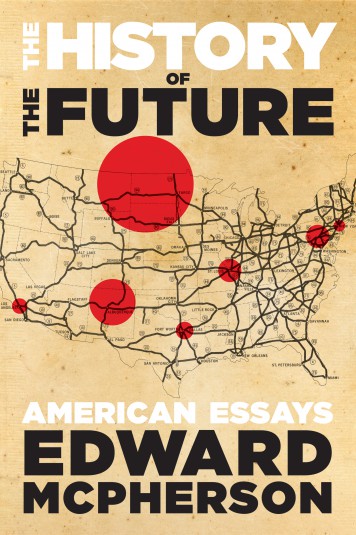 MC: In order for a collection to work as successfully as The History of the Future, the essays need to hold a common theme or connection. What connections did you want the reader to follow between the seven essays, specifically with regards to the presence of violence and oppression in each of the cities?

EM: I’m a fan of this quote from Ben Greenman that I’ve tacked up over my desk: “A book of essays can be a constellation. Individual pieces shine like stars, but to see the whole project as a unified thing requires a mythology. You need faith to make out a shape around all those dots of light, to believe in the bear or the swan.” I was always writing a book—not just individual pieces for publication—so I knew I wanted the essays to converse, to complicate and perhaps even contradict each other, in places. But you can’t just repeat yourself and you can’t hit a theme too squarely on the head (else it becomes trite). You have to have faith that your aesthetic/artistic/intellectual/moral preoccupations will bind the thing together while also creating some friction. In terms of violence and oppression, that wasn’t hard—scratch any surface in America and you’ll find it. What I became interested in was a kind of American amnesia, how trauma in the past was being forgotten or sanitized—for political purpose, or simply due to distraction or nostalgia or what-have-you)—and yet you couldn’t understand our current reality (or imagine where we might be going) without really trying to look at those past wounds.

MC: You spent time at the University of Minnesota as both a student and teacher, but Minnesota is not one of the states represented in The History of the Future. Why did Minnesota not fit well with the greater collection and the reflections you wanted to express?

EM: Oh, I had ideas for Minnesota! But none of them held my interest in the end. (Famous last words—perhaps I’ll write about them in the future?) Plus once the North Dakota essay grew so long (at about 80 pages), I didn’t want the book to get too top-heavy on the upper Midwest. As I was rounding out the collection, I tried for some sort of geographical coverage, though plenty of places were left out. For instance, there’s nothing directly about the Deep South, though of course there’s so much material there. I just couldn’t imagine writing about the south and not addressing racism, which was already the focus on the long essay on St. Louis. Early on, I knew the book could never be complete.

MC: As a follow up, do you observe a cultural disconnect between the Midwest and other regions of the United States?

EM: I think the idea of a disconnected Midwest (“coastal elites,” “flyover states,” “MFA vs NYC,” blah blah blah) is too easy, too simple, particularly given our interconnected daily lives. (Thanks, internet.) People are people; art is art; there’s culture everywhere. So my short answer is a firm “no.” But I also like the idea of places being PLACES, that is, distinct. (Otherwise, why get off the couch? This book is a travelogue, of sorts.) What I’m interested in is getting to know the particular texture of a place, wherever that is. And
I do enjoy the underdog mentality that comes from being a writer no longer living in NYC—we’re outside the rat race, we’re apart from the noise, we can let strange inner lives bloom. And of course there are the fabled creature comforts: access to nature, plenty of parking, a slightly bigger apartment. But obviously artists all over the country are doing vital work—in big cities, in towns, in the wilderness. It’s comes down to personal choice and working method.

MC: As the title, The History of the Future, suggests, time plays an important role in this collection. How do your reflections on the past, present, and future merge in these essays?

EM: I’ve always enjoyed the line attributed to Mark Twain: “History doesn’t repeat itself; it rhymes.” I’m interested in history for the way it not only enlarges our understanding of the past, but opens up new perspectives on the present—which then might give us an inkling of where we might be headed. The title—which comes from a line from Whitman—is a nod to how the book boomerangs between the past and the future (with us stuck muddling through the present). Of course there is no singular “History” with a capital H, and so in my writing I always find myself trying to contend with, make sense of, and/or expand the stories of others who have come before me.

MC: How did you balance historical analysis with personal memoir and what power does each element contribute to the essays in this collection?

EM: The book mixes journalistic attempts with more personal essays, but ultimately the power is the same for each—narrative drawn from life. I’m telling stories, trying to put myself (and the reader) under the sway of an empathetic imagination. I think “analysis” suggests too stark an objectivity. I don’t pretend to any such completeness (I’m suspicious of any tale told too easily). Each essay is a container for doubt. Hopefully the reader gets caught up in a widening kind of investigation that doesn’t end too easily (if it ends at all). Then the next move is theirs to make.

EM: I’m currently mulling over my next nonfiction project—which will be a single subject that I approach episodically (but more through chapters than in individual essays—in other words, the connective tissue will be a bit stronger, more apparent). How’s that for being thematically vague? I’m too superstitious in the early stages of a book to talk too much about the idea, else I lose interest. I also plan to revise a collection of short stories that I’ve been returning to over the years.

Edward McPherson is the author of three books, including The History of the Future: American Essays. He has written for The New York Times Magazine, The Paris Review, Tin House, The American Scholar, The Gettysburg Review, Salon, The Southern Review, True Story, Guernica, and Talk, among others. He has received a Pushcart Prize, the Gulf Coast Prize in Fiction, and a Minnesota State Arts Board grant. He teaches creative writing at Washington University in St. Louis.