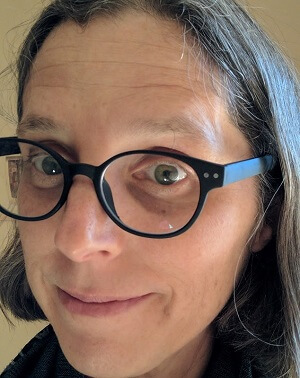 Born in Ohio, grew up in Buffalo and St. Louis, and went to college in Ohio.

I’ve always been militantly against “write what you know.” When I started writing fiction, I couldn’t even imagine setting a story in the Midwest. Especially not in St. Louis, which felt absolutely unenchanted to me. I was very wrong about St. Louis, but I needed distance. I had to try my hand at other cities, other countries, other periods of history. After I’d spent many years learning to write from a place of not knowing, I finally brought this habit to bear on St. Louis. And was stunned by the lush, eerie, tragic place that it is.

Well, I’m not a booster, but the Midwest in its urban, rustbelt dimension will always be home. It’s compelling because it embodies the paradoxes of memory and time. As I get older, I often feel as if the past is being erased behind me. At the same time, certain physical remnants go on existing (old letters and photos, my own face in the mirror, the childhood houses I stopped living in decades ago). An abandoned warehouse is a ready-made metaphor for what Ursula LeGuin calls “the broken world the conquistadors leave behind.” So it’s personal and psychological, but the resonance also feels broader. It feels as if it’s about capitalism and racism. Sometimes it feels as if St. Louis, with its history of housing discrimination and its swaths of urban prairie encircled by ever-expanding suburban development, is a hole in the heart of the country.

A few years ago, I returned to St. Louis and visited a grade school I attended there. The building was about to be torn down. Its gray-painted steel doors and mesh-covered windows were the same as they’d been forty years ago. I hadn’t noticed them consciously when I was a child, so I’d forgotten them. Now it was as if I’d never stopped standing in that schoolyard. The ancient past was leapfrogging over the recent past; the seven-year-old me felt more immediate than the person I’d been last week. Time felt both circular and implacably linear—because a do-over was not, had never been, possible. I suppose writing is an attempt to get around that iron law.

I write longhand. That’s the one constant. Oh, and I revise incessantly. Otherwise, every piece of writing demands its own process. In one case, that might be a kind of quilting: piecing the story together by laying out lots of fragments and deciding what goes next to what. In another case, a voice tumbles out of me. In the case of “Taki’s,” I woke up at two in the morning, suddenly obsessed by memories of a restaurant. I thought I’d jot a note about it and go back to sleep. Three hours later, I was still writing.

When I get stuck, I find it helpful to write lying down. Face down. I’ll free-associate words and sentence fragments. That removes the pressure to think in fully formed sentences. I used to write this way all the time. It did a number on my neck! I save it now for times when I’m truly in trouble—when what I’m writing feels shallow or untrue, or when I’ve been relying on my very conventional-minded executive function, or when I catch myself writing out of ambition or a desire for approval.

A piece of writing is never finished. Once something is published, I can’t go on revising, obviously. That doesn’t mean I don’t want to.

It changes, but right now there are two—Marilynne Robinson and W.G. Sebald. They have this in common: limber voice and a not overly engineered approach to narrative.

I’m working on a book. It’s part family memoir and part historical novel set in France during the sixteenth-century Wars of Religion. The two things are connected—at least, in my mind they are! Also, sixteenth-century France reminds me a little of the political situation in this country.