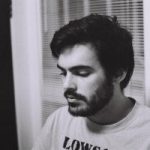 I have family in Minneapolis, Minnesota. My girlfriend, out near Willmar. We visit frequently. More indirectly, my great grandfather moved there from Finland as a homesteader. Like him, my grandfather worked in the lumber trade. And my father attended graduate school at the U. So Minnesota has always been a place of intrigue for me.

The initial draft of “Highways” actually took place between upstate New York and Philadelphia. Like Minnesota, as opposed to contrary belief, upstate New York has its fair share of cornfields and cow pastures. But they’re miniature in comparison. And when I was writing the piece, I was lucky enough to attend a wedding in rural Minnesota, and experience its vast expanses of farmland and uncapped skies. Those visuals really helped break the story wide open by deepening the main character Roy’s loneliness.

The vast spaces. I grew up in New York’s Hudson Valley, and I’m used to my horizons terminating quickly into swells of green. So to see those never-ending Minnesotan skies is a refreshing experience. All those stars! It doesn’t get any better.

My writing is definitely local. I think all good writing is. Aside from “Highways,” I generally set my stories in two places: Albany and the surrounding Adirondack area. All my free time in Albany was spent skateboarding and partying, so whenever I write about Albany a manic vibration always creeps into the piece. The Adirondacks, where I grew up, not so much. Those pieces more gravitate toward loneliness and nostalgia. What I’m getting at: placing a character in either environment will conjure its own headspace based on my own experiences, with its own specific voice. Or at least this is how it occurs to me in retrospect. Who can really say.

I’m not sure if I believe in writers block. If you’re having trouble writing, in my opinion, you’re probably just not interested enough in what you’re writing about. This happens to everyone, of course. When I’m not interested, a lot of times I’ll re-write the story from scratch while swapping the POV or tense. This allows for the piece to catch the light in different ways, so to speak. Sometimes this helps move things along. Other times, not so much. At that point, it’s just a matter of believing in the piece, sticking with it, straining it through the colander of my brain until I can get at the pure thing.

If I like the piece, I won’t let it go until it’s published. Aside from that, I have idea. Basically, when I reach my wits end. Or a teacher tells me it’s time to send it out. I can be neurotic about language, wanting everything to be perfect, but unfortunately my idea of this changes daily. Luckily, I have some amazing teachers who aren’t afraid to shoot me straight.

Right now, Fleur Jaeggy. She’s a Swiss writer whose work I’ve seen described as Champagne Gothic. MG should do an interview with her! I read her collection, Last Vanities, over and over. And I just got through I am the Brother of XX. It’s haunting stuff. Unlike anything I’ve ever read. The writing is fragmented and bizarre things will pass you by in a single breath, almost without notice. Then, later on, you’ll be staring into the refrigerator and ask yourself: So the twin brothers slept together in that story, didn’t they? Or, that woman hanged herself, huh? I like that feeling– when a story’s strangeness catches up with you. For me, that’s the gold standard.

I’m floating around a few short stories, editing a few more. I have a novel-in-stories I’m working on. All exciting things. I’m an associate editor at Juked, a reader for FENCE, and I’m about to enter my final year at Sarah Lawrence College, which has been a really amazing experience so far. I hope it never ends.

I have a couple stories available online at Juked and Bull: Men’s fiction. Aside from that, I’m sad to say there’s not much else on the internet. More to come, hopefully. Thanks for this opportunity!