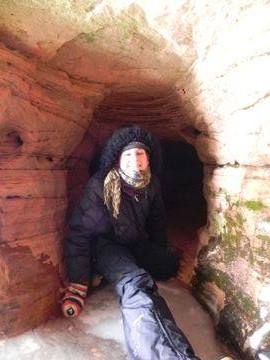 I grew up in the Twin Ports area, oscillating between Duluth and Superior for most of my life. I saw Lake Superior almost every day, and having such an incredible body of water serve as my point-of-reference for so long has made me attuned to environment in a way I think is unique to folks who grew up around, well, big things, vast things, a landscape that refuses to be ignored. I’m a direct descendent of the Fond du Lac Band of Lake Superior Chippewa, so the lake plays a large part of my spiritual and ancestral life as well. It’s temperaments are hypnotizing, from placid and glass-smooth to raging swells that can throw boulders. I try to channel this sort of unpredictable energy when considering pacing in writing.

And while beautiful, the area I call home also suffers from the boom-and-bust that is so common in communities whose economies rely on extractive industry—this has made me fascinated with the hubris of industry, and it’s affects on community life, especially on lives not commonly thought of as in extractive industry’s reach, is a major concern of my writing.

I’m fascinated by the unstable borders between country and city, how you can be in an urban center such as Minneapolis or Chicago, drive a while out of city limits and suddenly find yourself surrounded by farmland. The diversity of landscape and ecology—despite the popular idea that the Midwest is all corn and cows—also fascinates me. Just the other day, I was driving through Gurnee, Illinois, with some friends and on the side of the highway two Sandhill Cranes were violently tossing a snake up into the air and jabbing at it with their long beaks. I couldn’t believe that this animal drama occurred amidst banal, suburban traffic going to and from a large shopping mall! In this way, I think of the Midwest’s landscape as distinctly liminal. Wildness can be found in the ditch of almost any highway.

How do your experiences or memories of specific places—such as where you grew up, or a place you‘ve visited that you can’t get out of your head—play a role in your writing?

There was a period of time in my childhood when my father worked security at an oil refinery. My family only had one car, and he had to work at 5:00 am, so me, my brother, and sister had to wake up that early to go with in the car so we wouldn’t be home alone. I have incredibly dream-like memories of entering the oil refinery, the ripe smell of it in the air, all these mysterious lights blinking everywhere, and feeling as though I had trespassed. Having now grown up to be antagonistic toward extractive industry, this feeling of trespass is even more resonant now. There have been several instances of trespass now in my adult life, which I will not name here, but in every case I have trespassed into institutions which have sometimes been antagonistic towards me.

I think of the Midwest is a perfect site of trespass—as someone who is both white and native, my very body is a site of trespass on several levels. This is embedded in my writing. Further, I think that a few significant characteristics of the Midwest (loneliness, alienation, desertion, desperation, empty streets, empty buildings) create the conditions for which trespassing can occur with lesser threat of being caught. This is often the ignition for my fiction writing—where is my character, and why should they not be there?

The inspiration for my story in the Winter 2018 issue of Midwestern Gothic, “The Old Main Street Opera House,” came not from my own trespassing experiences but from my partner. She grew up in the upper peninsula of Michigan and as a child, she and her friends would play in the abandoned iron ore mines sprinkled throughout the town. That’s so creepy! And just further proof that the Midwest is full of excitement and real danger.

My writing process involves a lot of staring out of windows and taking showers. I currently work a retail job to support myself throughout the weekend, and I just cannot write on the days I come home from work. I make up for this by spending each day I don’t work writing, or working toward writing, whether that be having new experiences or critically engaging with the world, or just tending to a poem or a short story as though it is a small fire. And a couple days out of the year I wake up at 3:00 am after a dream has really shook me, and I just have to turn it into something—that’s the most unsettling rush I’ve ever felt. I would say that I’m a rush-writer first, and a reviser second—revising is an element of writing that I have to pay the closest attention to, or else I’ll let it fall by the wayside.

I keep a notebook near me whenever I read. If a writer is doing something I admire, I attempt to pin down how exactly they astonished me, and then make a writing prompt for myself based on the techniques I noticed, whether that be on the micro or macro level. I don’t always make it to the prompt immediately, but I know it is there for me to try if I ever do hit writer’s block.

I’ve also consulted my humble Tarot deck for inspiration on plot or theme or character development—there’s a wonderful book out there called The Creative Tarot by Jessa Crispin that revolutionized the relationship between creativity and intuition for me. Highly recommend!

I don’t know if I can necessarily tell when a piece of writing is finished but I can certainly say that I feel intuitively about completion. The only way I can describe it, and this might come off as corny but I don’t mind, is that the piece in question feels like it fits perfectly in your heart.

This is always a hard question for me (isn’t it for us all!), but I think my favorite author is Louise Erdrich. She has such a large range of work, and she’s still writing! As someone who can’t sustain attention on one project for too long, I admire that immensely. But I think what most draws me to Erdrich’s fiction is how much compassion she offers her characters. I think specifically of Romeo in a newer novel, La Rose. Romeo is detestable at first, but rapidly the reader develops a love for even him, and she does this by seamlessly intertwining concerns of intergenerational and personal trauma. I’m also drawn to how you can read her novels independent of her other work, but if you do choose to read the novels which complement each other it enriches the experience. I think that she demonstrates a brilliant control over character and plot and landscape and, just, ahhh! I’m a huge fangirl.

A lot of thinking about my nascent thesis as my time in an MFA program crescendos. That, and revising. Lots of it.

I haven’t developed my own website yet, but you can find my other published writing at Strange Horizions, The Eastern Iowa Review, and at Cream City Review.