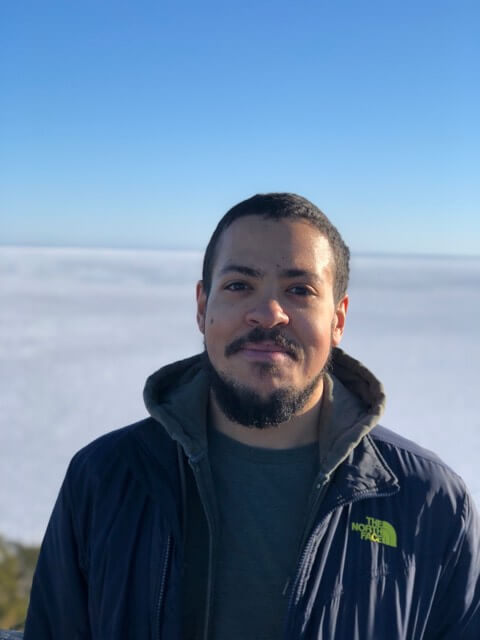 I was born in Detroit, and grew up in Michigan’s rural Upper Peninsula (U.P.). As a mixed race/black person, I’ve always felt somewhat out of place in my hometown, which is both very small and 91% white. In a small town, everyone is a celebrity, and this goes double for people of color; I stick out in a crowd, and am recognizable and recognized from across a room. During my time in high school, between the three grades above me freshman year, and the three below as a senior, maybe four black people went through our school. In fact, it was common for a class to have zero people of color. Microaggressions have influenced my work, from being told growing up that “You’re like the whitest black guy ever; you’re not like a thug,” to, as recent as last week, other locals assuming I’m not local: “You must have come here for school, eh?” I’m interested in the shared experiences of blackness and mixed race identity, and treat literature as an encounter with the other. If my writing can’t directly relate with someone who is similar to me, I hope it helps people dissimilar to me understand my human condition.

There’s a very particular charm and friendliness that permeates the entire region: I find myself saying “Excuse me” when someone bumps into me, and I think that’s emblematic of the Midwestern experience. The flip side: that outward friendliness remains, even when the inward thoughts are not so friendly, resulting in a weird, tense, passive aggression, where you’ll tell someone “We really need to hang out sometime,” even though you’d be happy never seeing them again, except you know you’ll see them in the same grocery store every week for the rest of your natural, God-given lives.

Everything moves a little slower here.

Shutout to Mike Lacher’s “Welcome to MidWestworld,” for a perfect depiction of literally the entire region (minus Chicago).

I’m a very visual person, and I think this comes through in my writing. I’ve always appreciated the “cinematic” aspect of writing: trying to show what’s going on as I’ve perceived it in my head, and rendering that view through words. At its core, that’s what all writing is: an attempt to transfer an idea from me to you via ink/pixels. For my writing, that comes out as strong imagery and a focus on visual elements. So I’ll rarely write a piece without a location in mind.

When I dream, they’re all about location: I’m in my old middle school, except it’s in the basement of my first workplace. Or I’m in my college bedroom, but it’s in my childhood home. I’m bad with directions (don’t ever ask me if something is north of here) but can use landmarks to navigate (It’s a couple blocks past the yellow building with the white sign, through the red light on the left), and I think that’s a result of my visual nature.

I place a high premium on engaging with other poets, writers, and artists in the community, drawing inspiration from their work, whether responding to a piece of visual art, or simply consuming poetry. I love open mic nights, readings and author events, and art museums, as well as poetry retreats, academia, and other privileged positions where artists gather and produce and discuss and consume alongside each other. I have only been writing poetry since 2016, so I am slowly building a group of trusted first readers and friend-editors.

But one of the fundamental properties of any writing—literary or otherwise—is that it is necessarily communication, so becoming part of and engaging with communities is required in order to keep producing art that is consumed and consumable by an audience.

This is a really hard question for me!

Is it a copout to say, “All my art, as with my life, is constantly under revision?”

My process is varied (and probably—okay, definitely—still developing). A poem usually begins with either a title that I plan to build around/expand upon, or an image or mood I want to depict. From there, I seek a “larger issue” to connect to the original image, or find a different image/idea to juxtapose to the initial idea. Sometimes the “larger issue” is obvious, but often I don’t find it until I’m well into the writing process. During revision, sometimes that original image or idea becomes the scaffolding that props up the “actual” poem, and I can remove the scaffolding once the rest is in place.

I composed “today at lunch danez smith says nigga” as part of my thesis; I knew I would be writing about the intersection of race and gender, and this piece speaks to the polarities of mixed race identities. I literally started with the title, and wrote my way into the final image, which might be obvious given the rather linear narrative form. I didn’t have the graffiti image in mind when I wrote the title, but I discovered it as I wrote. I knew the meat of the poem would be my ambivalence around saying the word, and the “who can say it” argument, which I’ve had many times with many different people of many different races—Kendrick Lamar brought the argument back up in a very public forum this spring during a concert—but many of the images higher up in the piece came through revision with my wonderful thesis advisor, Matthew Gavin Frank.

Obviously, Danez Smith has been a major influence on me; the way their poetry is informed by and informs race, gender, as well as politics is inspiring. Their latest book eschews super traditional form, which is something I am always excited about, without detracting from the language, which is rarely done well. I believe in poetry as protest, and as potential ground for encounter with the Other, and Smith thrives at this while remaining accessible; they are poet, business person, and personality all in one.

Other authors: Hanif Abdurraqib whose blend of poetry and nonfiction speaks to me, Richard Siken whose work is consistently beautiful and devastating, Anne Carson whose work transcends this world, Jericho Parms who made me believe art is romance (and vice versa), Maggie Nelson who is a vital critic, Mary Ruefle who sees things others never will, Lindsay Hunter whose fantastic voice produces wonderful fiction, Angela Pelster whose essays changed my life, Maxine Beneba Clarke whose work on race is necessary, Eve Ewing whose work on diaspora is enlightening, and Eula Biss, Claudia Rankine, and Roxane Gay who are all contemporary classics and visionaries in their own individual rights.

I am working on producing a podcast called Queer Americans (QueerAmericans.com, or on Twitter at @QueerAmericans), which seeks to document lived, queer experiences as they relate to art, religion, day-to-day life, multiple comings out, and life growing up. I have conducted around ten interviews for Season 1 (all fellow Midwesterners). They’re unique voices who I believe need to be heard. I have begun editing audio, and am in contact with a queer-identifying composer to do the music for the project, hoping to launch late summer/early fall.

In August, I must (unfortunately!) leave the Midwest for the West—Sacramento—where I will begin teaching English at Butte College. I’m looking forward to working with students in the first-year writing program, and grateful for my opportunity to also teach intro to poetry and intro to literature in the Spring 2019 semester.